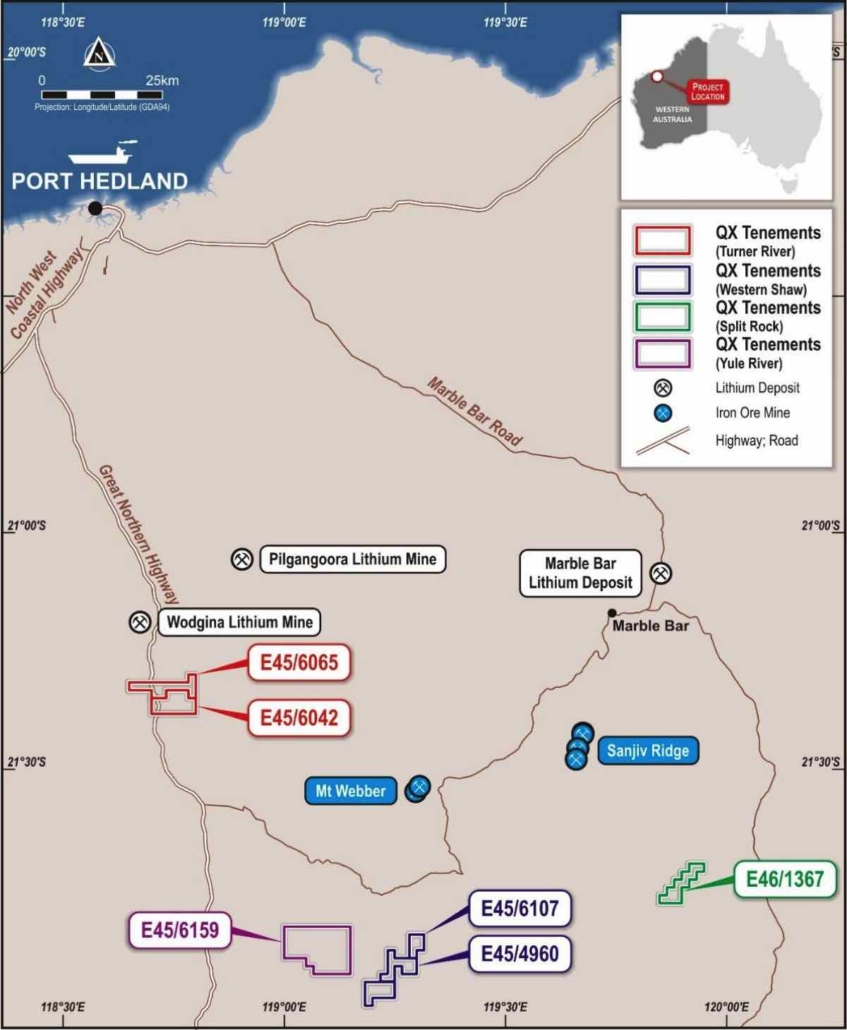 Location and Access
The Turner River lithium projects is located ~120km south of Port Headland, with access provided along the Great Northern Highway. The tenement starts about 12km south of the access turn-off for the Wodgina mine site (Figure 1).

Regional Geology
The Wodgina Greenstone Belt is dominated by mafic volcano-sediments with lesser, but still significant, quantities of epiclastic sediments, cherts and BIF’s. Lithologies are predominantly metamorphosed to amphibolite facies, however there are remnants of unaltered basalts and sediments in the more central portions of the belt. The western portion of the Wodgina Greenstone Belt comprises mafic volcano-sediments that are highly strained and metamorphosed consistently to amphibolites. They have a well-developed metamorphic fabric with a consistent NNE trend and NW dip. The eastern portion of the belt comprises mafic volcano-sediments and sediments which have undergone varying amounts of strain and metamorphism.

Regionally, lithium bearing pegmatites are focussed near N-NW trending lineaments, faults or granitic dykes, with the regional N-NW foliation having a significant influence during emplacement (Figure 2).

Exploration Potential
Previous exploration work at the Turner River lithium project has included geological mapping and geochemical sampling, however historical work has been limited and sporadic in nature. In the northeast of the tenement is the historic Turner River tin prospect; while in the south there is the Mt Francisco alum prospect (Figure 2).

A review of the remote sensing data highlighted 4 preferred areas for follow-up investigation and sampling programs. Principal targets were along the central north-northeast trending structural zone, with the central 2 zones parallel to the strike of the pegmatites at the Wodgina lithium mine (Figure 6). Previous reconnaissance in the central zone confirmed the presence of shallow dipping pegmatite dykes (Refer to ASX Announcement 21 October 2021). The recent field program further investigated the spatial extent of this previously identified pegmatite dyke swarm both laterally and along strike as well as undertaking systematic sampling to test the mineralogical variability of the pegmatites and their potential to host lithium bearing minerals. Additionally, the field crew was able to identify a number of additional pegmatite dykes of varying thicknesses up to 3m and traced along strike for over 300m 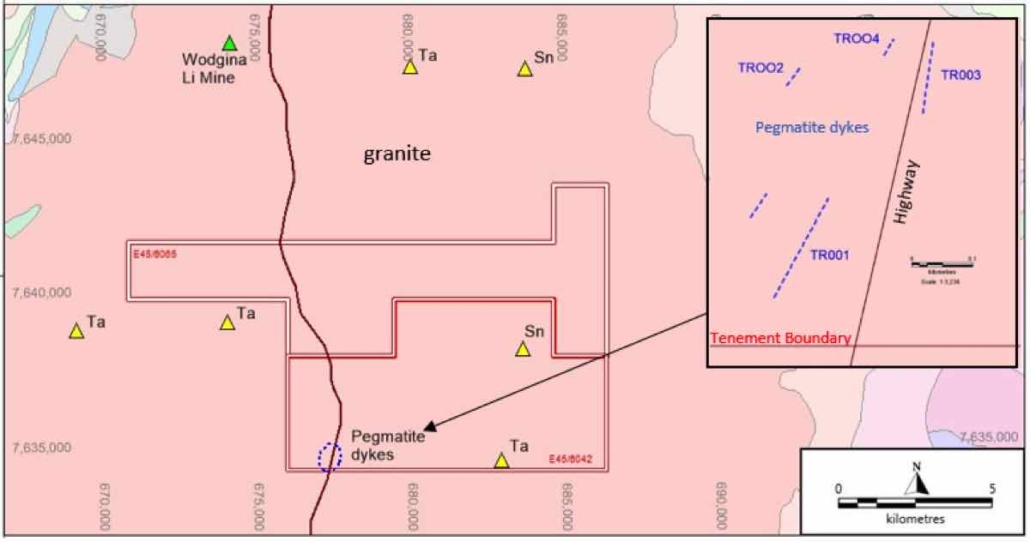 Location and Access
The 96km² project is located in the established Pilbara lithium province, Western Australia 220km south east of Port Hedland with access via the Great Northern Highway (Figure 1).

Lithium Potential
Covering part of an Archaean granite-greenstone terrain in the Pilbara Block, Western Shaw is located in a region which has seen previous exploration work uncover numerous LCT pegmatites. It lies at the southern end of the Western Shaw Greenstone Belt which is adjoined to the east by the Shaw Batholith and to the west by the Yule Batholith. It consists of mafic volcanic rocks interlayered with subordinate ultramafic rocks, chert/quartzite and iron formation (Warrawoona Group and Gorge Creek Group).

Other tenements in the Tambourah area adjoining and adjacent to E 45/4960 and E45/6107 have recorded pegmatites and Tambourah Metals recently reported on exploration to identify the lithium potential of pegmatites within their areas at Tambourah. 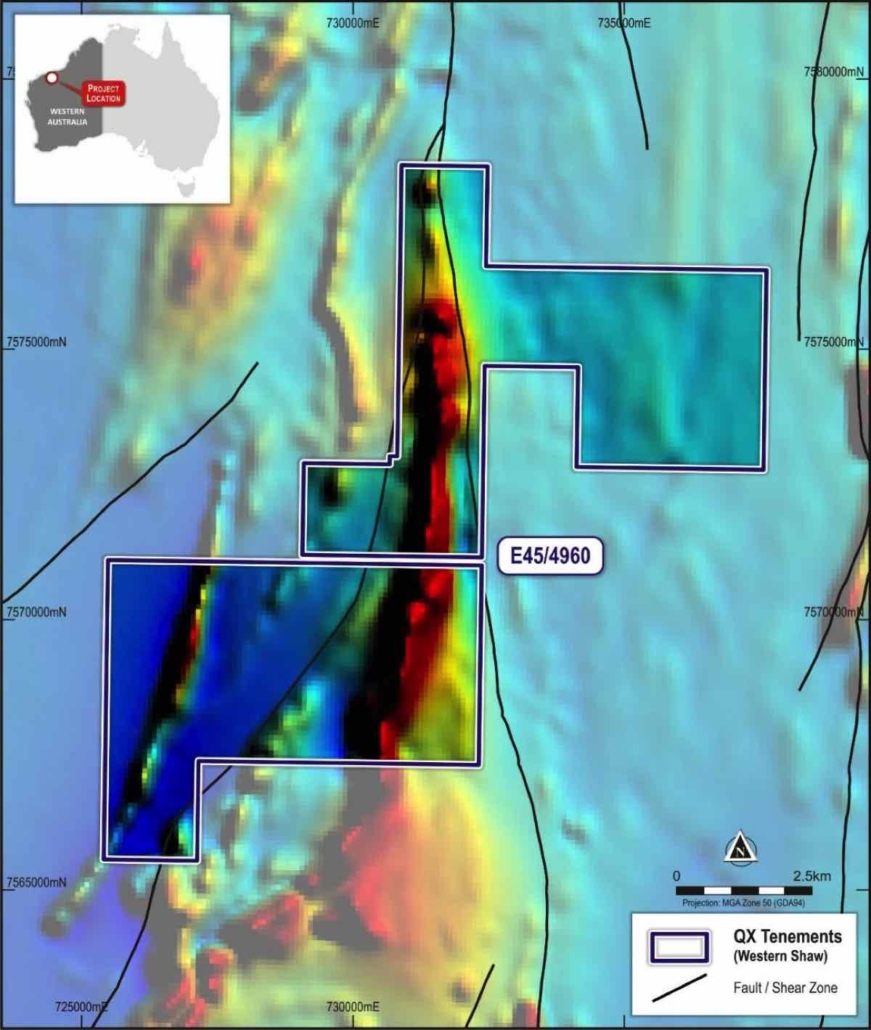 The project covers an area of 35km² approximately 200km southeast of Port Hedland and 180km north of Newman. It is located along the southeast margin of the Split-Rock Supersuite, which is considered regionally prospective for lithium bearing pegmatites. Strategically located close to existing infrastructure, the project is only 60km from Nulagine with easy access via established road networks.

The Split Rock project is bordered to the south by Thor Mining Plc’s (ASX: THR) Ragged Range project, which is focussed on the Mondana Monzogranite which forms part of the Split-Rock Supersuite. On 27 January 2022 THR reported a number of targets prospective for lithium within their tenement area, having reported elevated levels of tin, beryllium and tantalum, which are pathfinder elements commonly found in association with lithium bearing pegmatites.

Of additional significance is the potential of Split Rock to also be prospective for base metals including copper, lead, zinc, silver and gold. The prospectivity is due to the numerous base metals prospects which occur along the northern and south margins of the tenement. 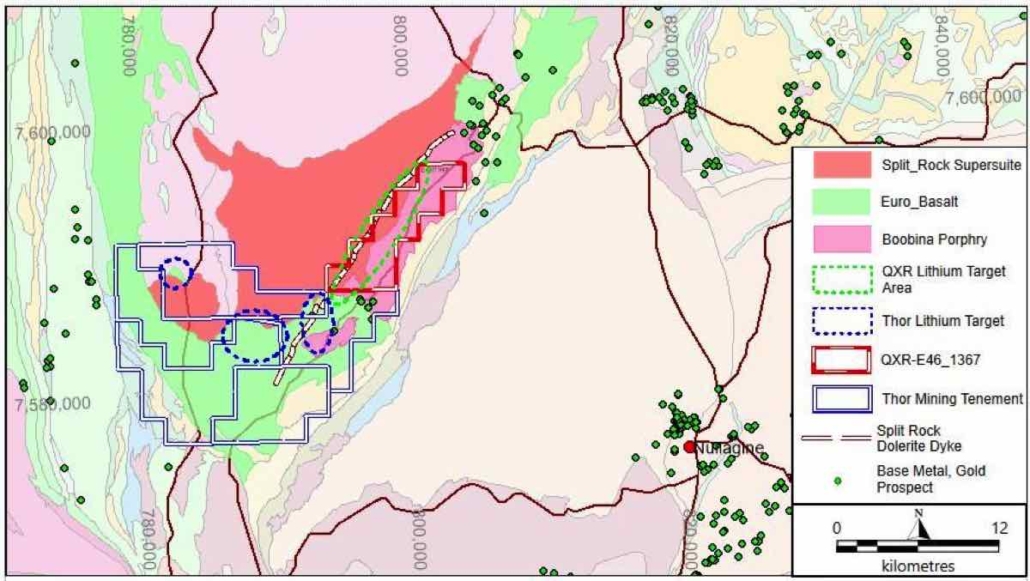